Going back in time to split older commits

Your feature branch is already six commits ahead of master. You’ve been a good developer and crafted meaningful semantical commits. But there’s the thing: you are slowly realizing that this beast will still take some more time before it’s really ready to be merged back into master.

What you also realize is that some parts are actually less coupled to the new feature. They could land in master earlier. Unfortunately the part that you want to port back into master earlier is in a commit somewhere in the middle of your six commits. Even worse, it also contains a change that relies on a previous commits of your feature branch. One could argue that you should have made that two commits in the first place, but then nobody is perfect.

At the time that you crafted the commit, you didn’t foresee that you might come into a situation where you want to gradually bring the feature into master. Heck! You wouldn’t have guessed that this whole thing could take us so long.

What you need is a way to go back in history, open up the commit and split it into two commits so that you can seperate out all the things that are safe to be ported back into master by now.

With the work splitted into two commits, we could just cherry-pick the precious bits into master.

Turns out, git comes with a powerful command git rebase -i which lets us do exactly that. It lets us change the history. Changing the history can be problematic and as a rule of thumb should be avoided as soon as the history is shared with others. In our case though, we are just changing history of our local feature branch. Nobody will get hurt. Promised!

Pro Tip: even if the changes would have been in one file, git could handle that. We keep things simple for this blog post though.

We’ve set up a public demo repository that we will use for this exercise. To make it easier to follow, each commit message is prefixed with the pseudo SHAs used in the graphs above. What follows is the branch graph as printed by git before we start to split the commit f3.

Now the first thing we want to do is to checkout our feature branch with git checkout feature. To get started with the rebase we run git rebase -i master.

Now what follows is that git opens a temporary file in the configured editor (defaults to Vim).

This file is meant to provide you some options for the rebase and it comes with a little cheat sheet (the blue text). For each commit we could choose between the actions pick, reword, edit, squash, fixup and exec. Each action can also be referred to by its short form p, r, e, s, f and e. It’s out of the scope of this article to describe each and every option so let’s focus on our specific task.

We want to choose the edit option for our f3 commit hence we change the contents to look like that.

Now we save the file (in Vim <ESC> followed by :wq, followed by <RETURN>). The next thing we notice is that git stops the rebase at the commit for which we choose the edit option.

What this means is that git started to apply f1, f2 and f3 as if it was a regular rebase but then stopped after applying f3. In fact, we can prove that if we just look at the log at the point where we stopped.

To split our commit f3 into two commits, all we have to do at this point is to reset gits pointer to the previous commit (f2) while keeping the working directory the same as it is right now. This is exactly what the mixed mode of git reset does. Since mixed is the default mode of git reset we can just write git reset head~1. Let’s do that and also run git status right after it to see what happend.

The git status tells us that both our userService.js and our wishlistService.js are modified. If we run git diff we can see that those are exactly the changes of our f3 commit. 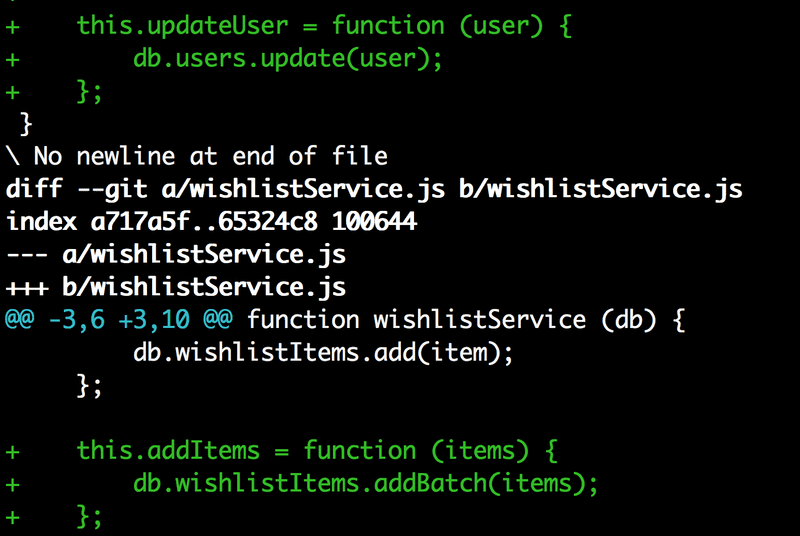 If we look at the log again at this point we see that the f3 is gone though.

We are now at the point that we have the changes of our previous f3 commit ready to be commited wheras the original f3 commit itself is gone. Keep in mind though that we are still in the middle of a rebase. Our f4, f5 and f6 commits are not lost, they’ll be back in a moment.

Let’s make two new commits: Let’s start with the commit for the changes made to the userService.js which are fine to get picked into master. Run git add userService.js followed by git commit -m "f3a: add updateUser method".

This is exactly what we wanted except our commits f4, f5 and f6 are still missing. This is because we are still in the middle of the interactive rebase and we need to tell git to continue with the rebase. This is done with the command git rebase --continue.

And that’s it. We now have the history we wanted. The previous f3 commit is now splitted into two commits f3a and f3b. The only thing left to do is to cherry-pick the f3a commit over to the master branch.

To finish the last step we first switch to the master branch. We do this with git checkout master. Now we can pick the f3a commit with the cherry-pick command. We can refer to the commit by its SHA key which is bd47ee1 in this case.

We now have the f3a commit sitting on top of latest master. Exactly what we wanted!

Given the length of the post this may seem like a lot of effort but it’s really only a matter of seconds for an advanced git user.

The described technique is also part of our Git Ninja Class workshop. If you like to sharpen your git skills you might be interested to join one of our upcoming workshops in Hannover or Istanbul in September.