The anatomy of a Git commit

Ever wondered what a Git commit looks like internally? Why it has those long revision identifiers? If they are unique or not? We are going to look at exactly that!

What’s up with those long revision names?

One of the first things people notice when they switch from other version controls to Git is that revisions use hard to remember 40 char long hashes. Why do that if you can just use revision names such as r4711, r4712 etc? The short answer: Git has integrity.

If you and me both look at revision f4f78b319c308600eab015a5d6529add21660dc1 on our machines and Git tells us that we have a clean working directory, we can be 100% sure that we are looking at exactly the same files. There is no way someone could manipulate a single bit without Git knowing about it.

This is especially important in an distributed version control system. There’s no chance that bits could go lost in transit without Git noticing it.

Those 40 character revision identifiers are actually SHA-1 hashes. So what is a SHA-1 hash? SHA-1 is an algorithm and what it does is: it takes some data as input and generates a unique 40 character string from it. So what does unique mean in that context? Unique means that no other input data should ever produce the same hash. The same input data however should always produce exactly the same hash.

If you are on a UNIX system, try this out.

This should print out a9eb85ea214a6cfa6882f4be041d5cce7bee3e45 no matter if you run it on your machine or I on mine. It’s the SHA-1 representation of the string thoughtram.

Now that we know what a hash is, we find us wondering, what exactly is the input data that Git uses to get to the commit hash? Let’s start with a very abstract idea and iterate on it until we have a strong understanding of Git’s internal commit representation. In principle it looks like this in pseudo code.

It’s a SHA-1 hash over a bunch of meta data (commit message etc) and the hash of the entire snapshot of the working directory with all it’s files and folders. Let that sink in for a second. It’s a hash over some meta data and another hash. So what exactly is this other hash that we hash again?

When I said Hash-Of-Entire-Working-Directory I made a bit of an oversimplification. Yes it’s true, it’s a hash over the entire working directory with all it’s files and folders excluding ignored files. But at the same time it’s not quite that simple. Let’s assume the following project structure and then examine how it is represented with the corresponding tree object.

Here is what Git’s representation of the working directory looks like. 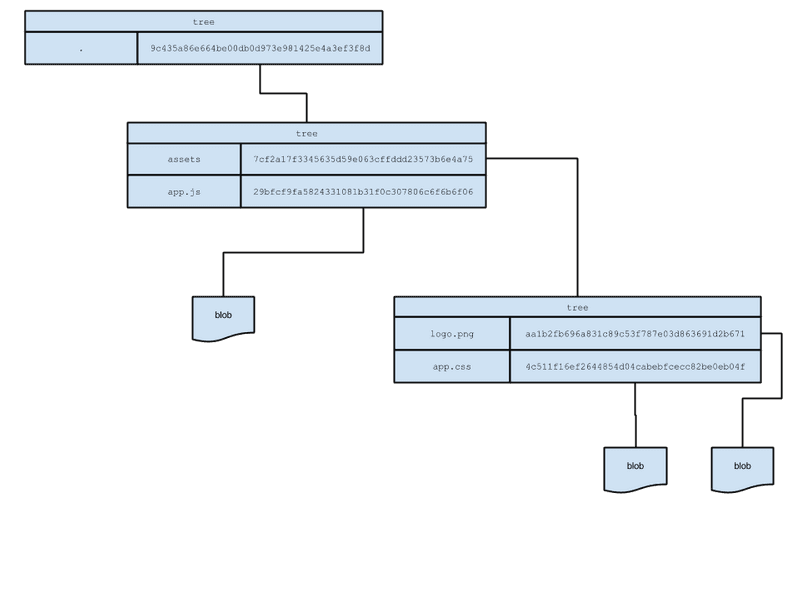 Both logo.png and app.css are in the same directory: assets. And this directory, assets is represented as a tree object. So what is the tree object? The tree object works like a dictionary. It maps names to SHA-1 hashes. Behind those hashes there may be simple files (represented as blobs) or other tree objects.

Let that sink in again, 9c435a86e664be00db0d973e981425e4a3ef3f8d is the hash of the root tree object which essentially translates into a dictionary that maps names to hashes and those hashes can refer to blobs (for files) or other tree objects which in turn are dictionaries themselves that map names to hashes which can refer to…ah well, you get the idea.

Let’s go back to our commit object from above and fill it with life. Let’s assume we freshly started the repository and this is our initial commit. What follows is again pseudo code to demonstrate what exactly is used to get to the commit hash.

It’s all the meta data plus the hash of the root tree object. And of course Git creates a SHA-1 hash from those contents. The commit hash.

Remember that I said Git has integrity? You can’t change a single thing about this commit without getting a different SHA-1 commit hash. Want to change the commit message? The commit message is part of the content that is used to produce the SHA-1 hash, changing it will change the commit hash. What if we just add a whitespace somewhere in app.css? Doesn’t matter. The SHA-1 hash of app.css won’t be 4c511f16ef2644854d04cabebfcecc82be0eb04f anymore and that in turn will cause the assets tree object to not be 7cf2a17f3345635d59e063cffddd23573b6e4a75 anymore and that in turn will cause the root tree object to not be 9c435a86e664be00db0d973e981425e4a3ef3f8d anymore. That’s integrity.

It was pointed out on reddit that not only the metadata and the hash of the tree are hashed to become the commit hash but also the hash(es) of the parent commit(s). I left this out intentionally in order to lower the complexity of the post. For the curious reader, this is closer to what Git does in practice.

In this post, we explored what Git’s long revision numbers are about and how they provided integrity using a solid cryptographic approach.

Please note that I simplified some parts intentionally in order to reduce the noise and make the essence easier to grasp. If you like to dig deeper, I highly recommend to read up on the Git’s internals.

This post is part of a future blog series about Git internals and will also be part of our book rebase - the complete guide on rebasing in git.